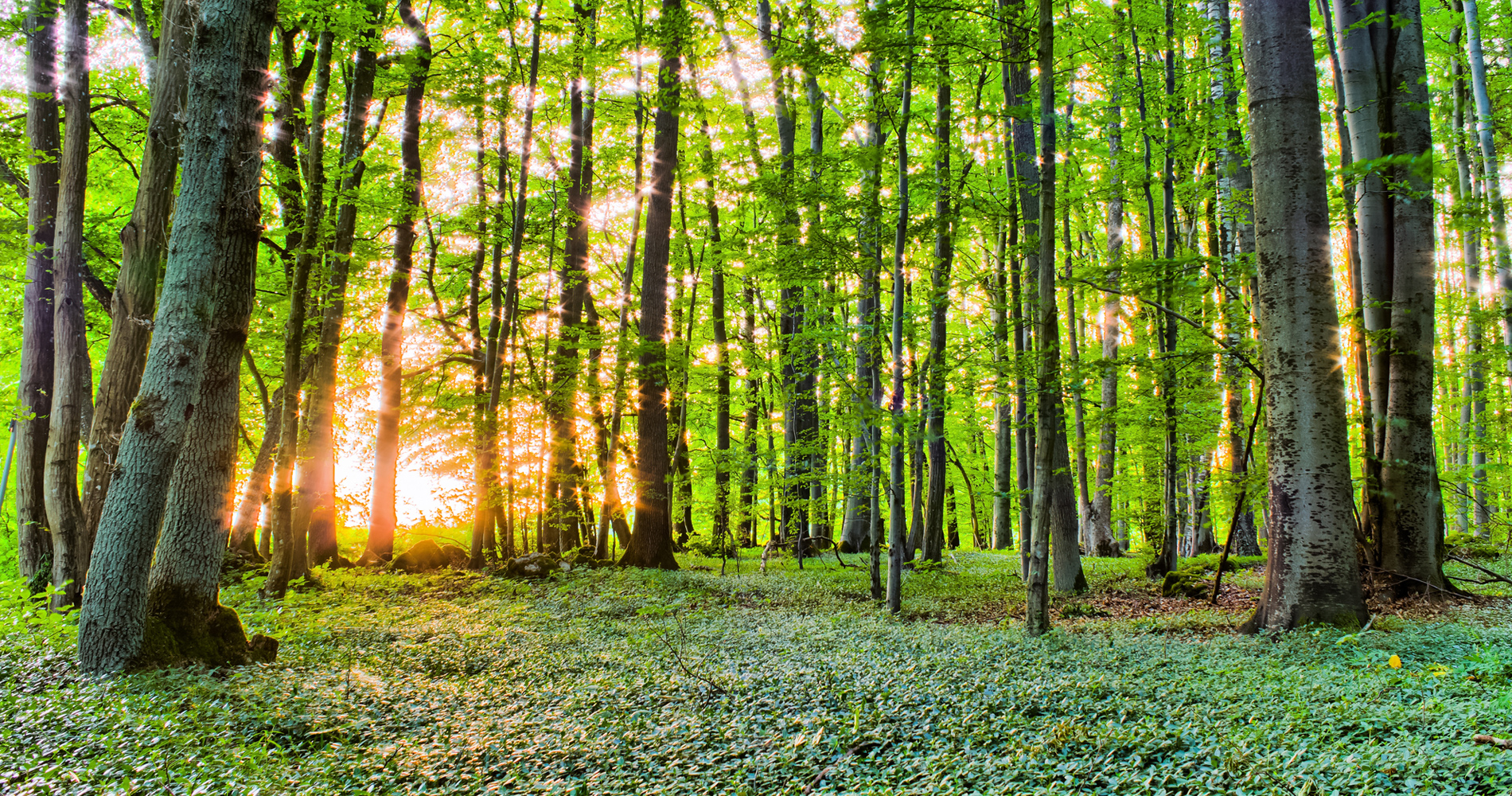 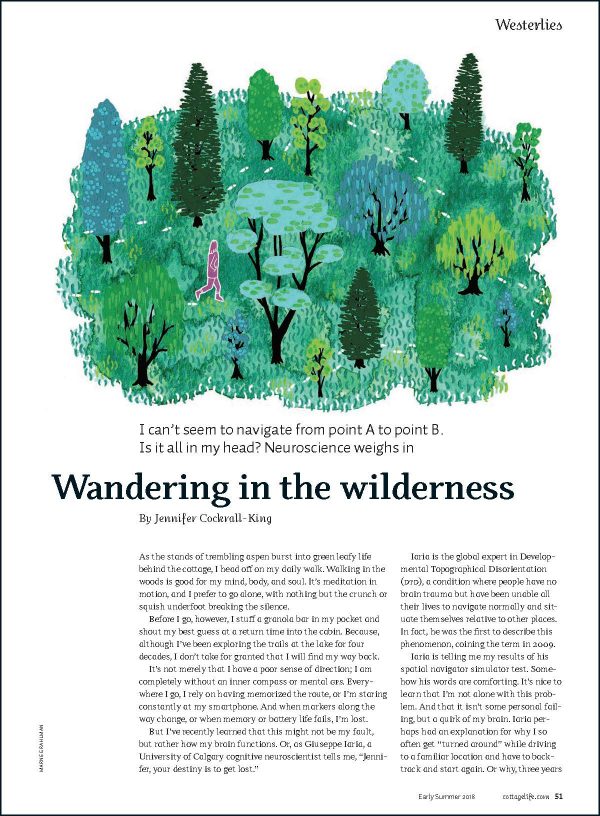 I CAN’T SEEM TO NAVIGATE FROM POINT A TO POINT B. IS IT ALL IN MY HEAD? NEUROSCIENCE WEIGHS IN.

As the stands of trembling aspen burst into green leafy life behind the cottage, I head off on my daily walk. Walking in the woods is good for my mind, body, and soul. It’s meditation in motion, and I prefer to go alone, with nothing but the crunch or squish underfoot breaking the silence.

Before I go, however, I stuff a granola bar in my pocket and shout my best guess at a return time into the cabin. Because, although I’ve been exploring the trails at the lake for four decades, I don’t take for granted that I will find my way back.

It’s not merely that I have a poor sense of direction; I am completely without an inner compass or mental GPS. Every- where I go, I rely on having memorized the route, or I’m staring constantly at my smartphone. And when markers along the way change, or when memory or battery life fails, I’m lost.

But I’ve recently learned that this might not be my fault, but rather how my brain functions. Or, as Giuseppe Iaria, a University of Calgary cognitive neuroscientist tells me, “Jennifer, your destiny is to get lost.”

Iaria is the global expert in Develop- mental Topographical Disorientation (DTD), a condition where people have no brain trauma but have been unable all their lives to navigate normally and situate themselves relative to other places. In fact, he was the first to describe this phenomenon, coining the term in 2009.

Iaria is telling me my results of his spatial navigator simulator test. Some- how his words are comforting. It’s nice to learn that I’m not alone with this problem. And that it isn’t some personal failing, but a quirk of my brain. Iaria perhaps had an explanation for why I so often get “turned around” while driving to a familiar location and have to backtrack and start again. Or why, three years ago, I left home for a one-hour walk on a route I’ve been travelling for a decade— the perfectly straight north-south Trans Canada Trail behind my house in the Okanagan—and managed to get disoriented, returning several hours later. (By the time I course-corrected, I was about 10 km farther north than I should have been. Luckily, I have strong legs and a calm constitution.)

And maybe this is why—being as obsessed with exploring the outdoors as I am—I have nonetheless walked the same route at the lake for almost my whole life: from cabin to cut line, to the road that leads to nearby Castle Island, following the dirt road around the small island, and then road, cut line, and back to the cabin. It’s only by memorizing the landmarks that I can find my way.

According to Iaria, most people, about 98 to 99 per cent of the population, only need to travel a route three or four times to create a bird’s-eye view of a map in their mind of where things are, like a Google Earth flyover in their imagination. This is called a cognitive map. Scientists have recently discovered that there are specialized neurons—place cells, grid cells, border cells, and head direction cells—that interact and over- lap with one another to create a “sense of place” or direction, even in the absence of visual, auditory, or olfactory clues. That’s how good navigators sense which direction something is in and just know where a destination is in relation to other places, like the departure point. The overlap and interaction of these mental processes creates a map in the mind without being able to see it directly. And then they seamlessly flip between their cognitive map (imagination) and the landmarks they recognize (memory) to orient themselves and find their way.

People with merely a poor sense of direction get lost in new or complicated places, while those with DTD get lost in their own neighbourhood—no matter how long they live there. I’m in the one to two per cent who are simply unable to form a cognitive map. My otherwise functioning mind relies solely on memorization and external clues. And Iaria, who shares his work on gettinglost.ca, thinks that there are simply a limited number of pathways we can learn with- out overloading our brain. Knock down a derelict cabin that I use to situate myself, and I’ve lost my mental breadcrumb trail. And forget maps, they just induce panic. I know there’s a relationship between what’s on the two-dimensional paper and my three-dimensional environment, but I just can’t seem to make the leap.

Iaria and his colleagues are still trying to puzzle out what the defect or disconnect is. Brain MRIs of people with DTD show no physical differences compared with those who navigate naturally. It’s not even likely that people with DTD lack place, grid, head direction, or border cells. It’s that there’s some problem with what Iaria calls the “functional connectivity” of this neural network. The current theory is that there’s miscommunication between the parts of the brain that form the cognitive map, like faulty wiring.

“I kind of envy you,” my hiking buddy tells me, when I explain—with vindication, because now I have “a condition!”— that I’m not just failing to pay attention to my surroundings. Despite loving hiking as much as I do, he must constantly seek out new routes or he’s bored. I have no idea why he can’t see what I see on the same familiar trails. On my 45- minute loop at the cabin, I notice how the raspberry patches expand and shrink from year to year. Or that a storm has uprooted a spruce that has stood for decades. I get to appreciate the subtle beauty of a clearing closing up with the new growth of poplars. And each season brings new bird life to the forest canopy. With all this change, it’s like I’ve never walked the same route twice.

Clearly, my navigational woes have made me into a creature of habit. Is this why I’m drawn to the cabin as my place to recharge and not to exotic locations? Perhaps, but I’m good with that. With 40 years of memories firmly etched, I know every twist and turn, path and road. If I stick to my route, I can wander both physically and mentally without fear of getting lost. And freed up from so many microdecisions, I can lose myself in the beauty. That said, there’s always the granola bar in my pocket, just in case. 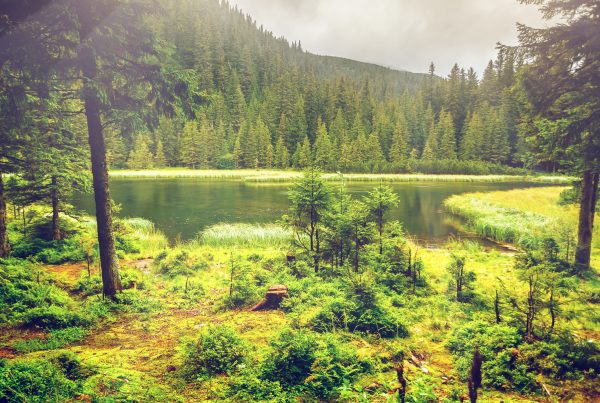 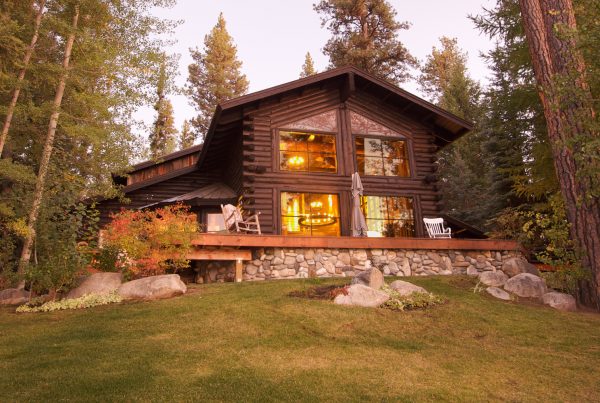 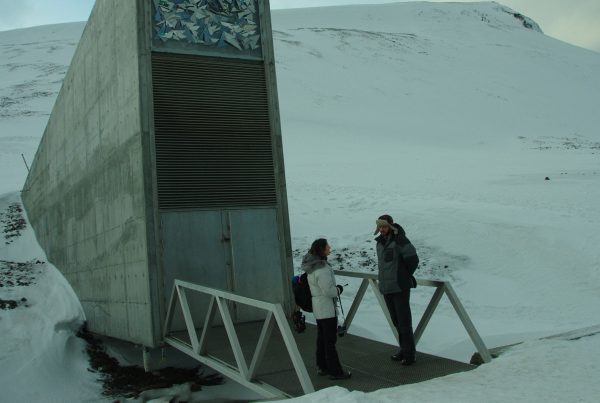 PANTRY IN THE PERMAFROST: INSIDE THE ARCTIC DOOMSDAY VAULT